F.C.I. Breed Standard For the Wolfspitz/Keeshound

BRIEF HISTORICAL SUMMARY :
German Spitz are descendants of the stone age " Peat Dogs" (Torfhund) " Canis familiaris palustris Rüthimeyer" and the later Lake Dwellers (pfahlbau) Spitz; they are the oldest breed of dog in Central Europe. Numerous other breeds have been produced from then. In non-German speaking countries Wolfsspitz are known as Keeshonds and Toy Spitz as Pomeranians.

GENERAL APPEARANCE :
Spitz breeds are captivating on account of their beautiful coats, made to stand off by plentiful undercoat. Particularly impressive is the strong, mane-like collar round the neck (ruff) and the bushy tail carried boldly over the back. The foxy head with alert eyes and the small pointed, closely set ears give the Spitz his unique characteristic, cheeky appearance.

IMPORTANT PROPORTIONS :
The ratio of height at withers to body length is 1 : 1.

BEHAVIOUR AND TEMPERAMENT :
The German Spitz is always attentive, lively and exceptionally devoted to his owner. He is very teachable and easy to train. His distrust to strangers and lack of hunting instinct make him the ideal watchdog for home and farm. He is neither timid nor aggressive. Indifference to weather, robustness and longevity are his most outstanding attributes.

HEAD AND SKULL:
Well proportioned, wedge shaped when seen from above; from side showing definite stop. Dark muzzle equal to length of flat skull. Neither coarse nor snipey. Nose black.

CRANIAL REGION :
The Spitzs medium sized head, seen from above, appears broadest at the back and tapers in wedge shape to the tip of the nose.
Stop: Moderate to marked, never abrupt.

FACIAL REGION :
Nose : The nose is round, small and pure black, dark brown in brown Spitz.
Muzzle : The muzzle is not overlong and stands in pleasing proportion to the skull.( In Wolfspitz/ Keeshond, Giant Spitz and Medium-Size Spitz the ratio length of the muzzle to length of the skull is approximately 2 : 3, in Miniature Spitz and Toy Spitz approximately 2 : 4.).
Lips : The lips are not exaggerated, close fitting to the jaws and do not form any folds to the corner of the mouth. They are completely black in all colours, brown in brown Spitz.
Jaws/Teeth : The jaws are normally developed and show a complete scissor bite with 42 teeth, corresponding to the teeth formula of the dog, i.e. the upper teeth closely overlapping the lower teeth and set square to the jaws. In Miniature and Toy (Pomeranian) Spitz the lack of few premolars is tolerated. Pincher-bite is permissible in all varieties of Spitz.
Cheeks : The cheeks are gently rounded, not protruding.
Eyes : The eyes are of medium size, longish shape, slightly slanting and dark. The eyelids are black in all shades of colour, dark brown in brown Spitz.
Ears : The small ears are set high and relatively close to each other, triangular and pointed, they are always carried upright, stiff at the tips.

NECK :
The medium length neck is set broadly into the shoulders, slightly arched without throatiness and covered by a thick, profuse coat forming a large ruff.

BODY :
Topline : The topline starts at the tips of the erectly carried prick-ears and merges in a gentle curve with the short, straight back. The bushy, sweeping tail, which partially covers the back, rounds off the silhouette.
Withers / Back : The high withers drop imperceptibly into the shortest possible, straight, firm back.
Loin : Short-coupled, broad and strong
Croup : The croup is broad and short, not falling away.
Chest : The deep chest is well sprung, the forechest well developed.
Lower line : The brisket reaches as far back as possible, the belly has only a slight tuck up.

TAIL :
The tail is set on high and of medium length. It reaches upwards and rolls forward over the back and is covered with very bushy hair. A double curl at the tip of tail is tolerated.

LIMBS:
FOREQUARTERS :
General appearance : Straight, rather broad front.
Shoulders : The shoulder-blade is long and well layed back. The upper arm, which approximately the same length, forms an angle of 90 degrees to the shoulder-blade. The shoulder is well muscled and firmly connected o the brisket.
Elbow : The elbow joint is strong, close fitting to the brisket and turns neither in nor out.
Forearm :The forearm is of medium length in relation to the body, sturdy and completely straight. The back of the forearm is well feathered.
Metacarpus ( Pastern ) : The strong, medium length front pastern stands at an angle of 20 degrees from the vertical.
Front feet : The front feet are as small as possible, round and closed, so called cat feet, with well arched toes. Toe-nails and pads are black in all shades of colour, but dark brown in brown dogs.
HINDQUARTERS :
General appearance : The hindquarters are very muscular and abundantly feathered to the hocks. The hind legs stand straight and parallel.
Upper and lower thigh : Upper and lower thigh are of about equal length.
Stifle : The stifle joint is strong with only moderate angulation and is turned neither in nor out in movement.
Metatarsal (Hock) : The hock is of medium length, very strong and vertical to the ground.
Hind feet : The hind feet are as small as possible, tightly closed with well arched toes, so called cat feet. The pads are coarse. The colour of nails and pads is as dark as possible.
GAIT / MOVEMENT : The German Spitz moves straight ahead with good drive, fluid and springy.
SKIN : The skin covers the body tightly without any wrinkles.

COAT:
Hair : The German Spitz has a double coat - Long, straight, stand off top coat and short, thick, cotton-wool-like undercoat. Head, ears, front side of front and hind legs and the feet are covered by short, thick (velvety) hair. The rest of the body has a long rich coat. Not wavy, curly or corded, not parted on the back. Neck and shoulders are covered by a thick mane. The backside of the front legs is well feathered, the hind legs have ample feathering from croup to hocks. The tail is bushy.
GREY-SHADED SPITZ - KEESHOND : Grey-shaded is a silver grey with black hair-tips. Muzzle and ears dark in colour, round the eyes well defined spectacles shown as a delicately pencilled black line slanting from outer corner of eye to lower corner of ear, coupled with distinct markings and shading forming expressive short eyebrow, mane and ring on shoulder lighter, fore-and hindlegs without any black markings under the elbows or stifles, except slight pencilling on the toes, black tip of tail, underside of tail and trousers pale silver grey.

SIZE AND WEIGHT :
Height at withers : 49 + - 6 cm and with a weight corresponding to its size

FAULTS :
Any departure from the foregoing points should be considered a fault and the seriousness with which the fault should be regarded in exact proportion to its degree. 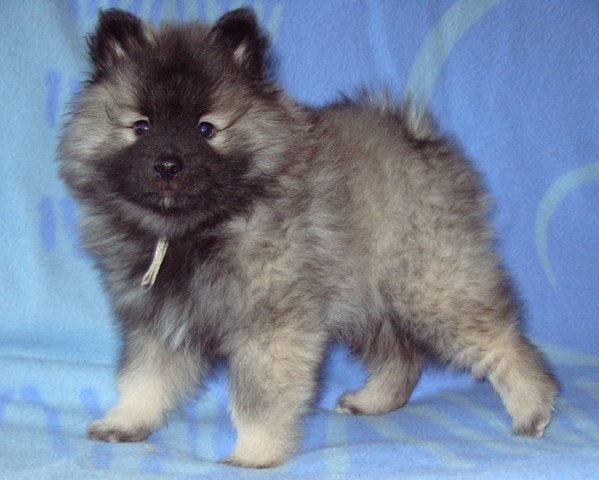 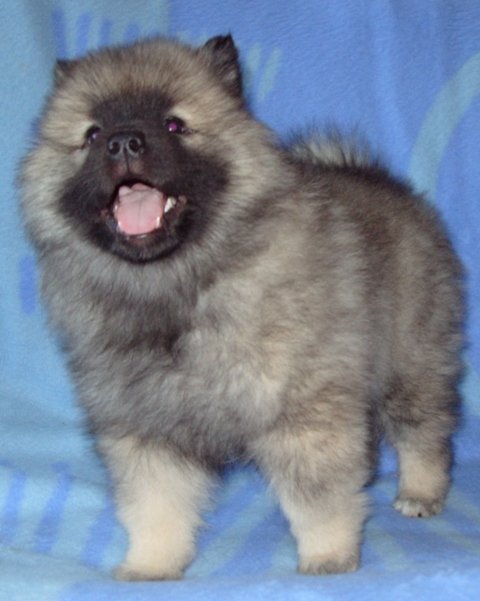 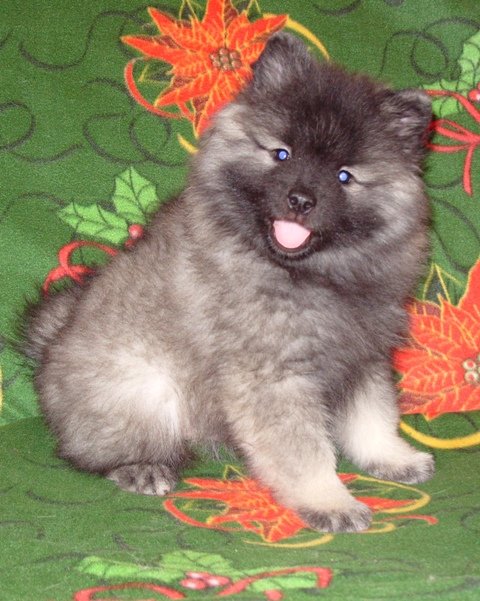 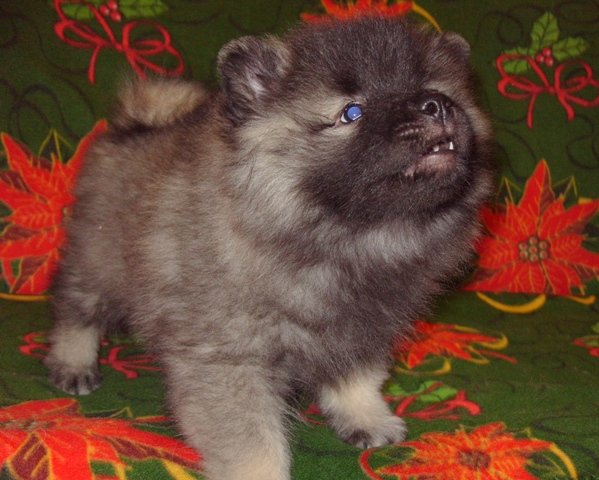 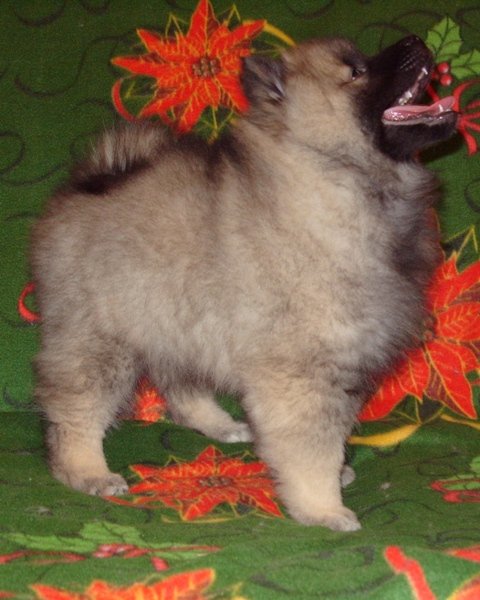 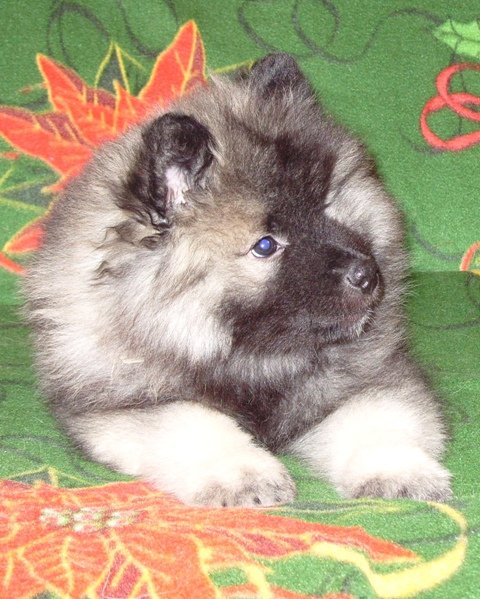 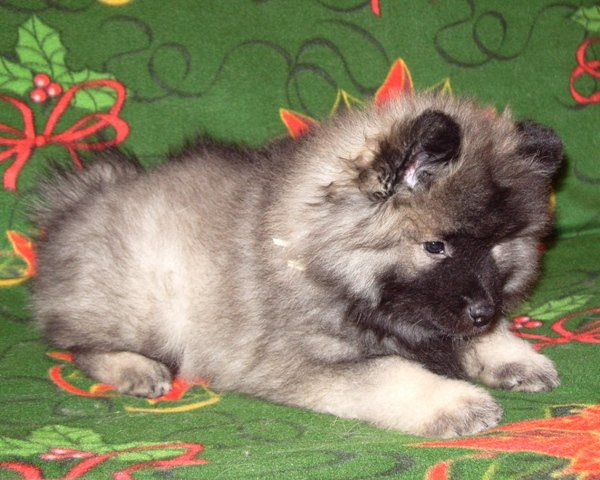